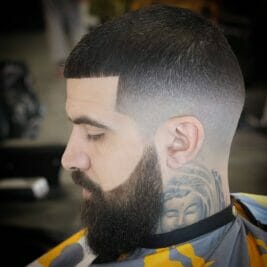 Balding can make a man feel a wide range of emotions, from acceptance to frustration and even near-anxiety. Some people may desperately look for miracle cures, but many others use a simple, tried-and-true method. Yes, buzz cuts work very well for men whose hair is getting thin. Here’s what’s so great about it. In the past, you’ve probably seen a lot of men with buzzed hair who were going bald or thinning and didn’t even know it.

So why don’t all men who are going bald do it? Well, one reason is that it takes a lot of guts to get your first buzz cut. It’s a significant change, and making big changes is never easy. This article is for anyone who has even thought about it. This article Buzz Cuts For Thinning Hair will explain in detail why buzz cuts are significant for thin hair. And some styles that you can try for yourself.

What will The Result be before and after the Buzz Cuts for Thinning hair?

Buzz cuts don’t make hair thin or fall out. The only connection we could find between buzz cuts and hair loss was that men with male pattern baldness often choose to shave their heads instead of going for a less obvious solution like a comb-over. The good news is that there is no cause-and-effect link between the two other than the idea of personal preference.

If you wear your favorite cap daily, you are more likely to slow hair growth or cause hair loss. The main point is that restricting blood flow and exposure to too much sebum and sweat could hurt the health of your scalp and make it harder for your hair to grow back naturally. There are so many kinds of buzz cuts out there that one of them is sure to work for how your hair grows and how it feels. Because of this, it’s essential to try different things, and your barber will play a significant role in this at first.

What are the benefits of Buzz cuts for Thinning hair?

The best thing about a buzzed haircut is that you don’t need a lot of tools. Just a barber who is trained and has sharp clippers. Again, it doesn’t matter what kind of hair, face, or eyes you have because this hairstyle looks great on everyone. If you have clippers at home, you don’t need to go to the barber. The buzz cut is one of the short haircuts for men that you can do yourself because all you have to do is buzz the hair with clippers.

It’s no secret that your hair grows at different speeds on different parts of your head. Even if you cut your hair short and let it grow out, you will see that some hair shafts are longer than others.This is a natural thing to do, and styles that accept and work with it tend to look more natural.

If your hair is cut unevenly, the strands won’t be able to support each other as well as if they were all the same length. Shorter strands next to longer ones won’t be able to help them as well, so the longer ones will fall to the side. This can look lifeless and thin. Even if the hair looks thin at first when it’s all cut short and even, it starts to look thicker. Your scalp will look very, very different from how it did before. You may start to wonder why you didn’t try this sooner.

2] A buzz cut solves the problem of a receding hairline

When there is a big difference between the hair and the forehead, it makes a receding hairline stand out more. In general, this difference is less noticeable when the hair is short. This is especially true when a mid or high fade can hide the receding temples, like in the picture above. This is especially true when the hairline is only slightly or moderately receding. But you can hide a receding hairline by getting a buzz cut, even if it’s pretty far along. A crew cut might be a good choice if you want to hide some of your receding temples.

Thehe hair on top is long enough to hide at least some of the receding temples if not all of them. So, a buzz cut could work for you if you want to hide your temples or cover them up.

Men whose hair is fine and getting thinner tend to worry about it. Many spend hours and hours in front of the mirror, looking at themselves from different angles and in different kinds of light. They look for the right hairstyle to hide the fact that their hair is getting thinner. It might be a comb-over or at least a slight variation of one.

Usually, this search that seems to go on forever ends in frustration. Long, thin hair is hard to style because it doesn’t stay where you put it. This is mainly because there aren’t enough hair strands to hold each other up, and the ones there are too thin and weak to do so. Getting a buzz cut is a dream compared to this lengthy and frustrating process. It can be done very quickly and is easy to keep up with. Making your style is freeing and will save you a lot of money.

With a buzz cut, it’s easy to wash and dry your hair, which will make you like having less hair, which you used to try to hide. The best part is that you’ll start to enjoy your scalp in ways you never thought you would.

Buzz cuts will always be in style, even if your hair is getting thinner and your hairline is receding. In some ways, it’s best not to think of a buzz cut as a way to hide thinning hair, even though this would be a good reason to get one.

It’s better to think of a buzz cut as an excellent way for a man with thin hair to look good. It’s not about hiding anything; it’s just about being happy with what you have and doing it stylishly. Buzz cuts are popular, whether it’s the Ivy League, the induction, or the crew cut. They’re becoming more popular because men worldwide want to look good while being accessible and convenient. In a world where being busy is becoming the norm, people will look for any way to make their lives easier.

A buzz cut would give you simplicity in a world full of complexity.

These Buzz Cuts for Thinning Hair are Attractive

No matter the buzz cut you get, a high fade is a great way to hide a receding hairline. A fade on the sides means the hair gets longer very slowly as it goes from the sides to the top.

The fade can end high (around the temples), low (just above the ear), or in the middle (in between those two). The style is a crew cut with a high fade in the picture above. This style works well for men with thin hair because the hair on top is long enough to style and hides the receding temples. If you have a crew cut, you can cover up some thin spots by slicking or spiking the hair to the side. But the point of this one is that you should think about a mid or high fade no matter what kind of buzz cut you get, whether it’s an induction, a burr, a crew, or something else.

The induction cut is a very, very easy thing to do. It is made up of short, cut hair that is the same length in all directions. The top, sides, and back sizes are the same. A zero grade is often called an “induction cut” (achieved without guards attached to the clipper). In recent years, though, it’s been used more as a general term for a very short haircut in which all hair is cut down to the same length.

The most appealing thing about this style is its easy use. It’s easy and quick to do, but getting it perfectly even isn’t as easy as it might seem at first. Thin spots are always less noticeable when the hair is short and even.

There is a great deal of misunderstanding, and there is even a little debate regarding the distinction between a taper and a fade.

To put it more plainly, a taper is merely another name for an extremely low fade. It typically stops short of the top of the ear most of the time. It typically features a slightly shortened neckline, but the hairline that falls about the ear is not altered in any significant way. This works well for thinning hair for the same reasons as a conventional induction cut; it is a straightforward, fashionable addition that you can accomplish on your own and is uncomplicated.

Being bald and having a beard have always gone together. Something is awe-inspiring about a bald head and a man-fur-covered face that looks rough and full.Yes, it works great for men whose hair is getting thinner.The thinner your hair is, the less you can do with it. More specifically, it can’t be styled or used to change the shape of the face as much. For example, a face can look less round and more oval by changing its hairstyle.

But this might not help men whose hair is getting thinner. Beards, on the other hand, can be used instead. Most people agree that it changes the shape of a man’s face, and this can work to his advantage. Even though it’s a more refined look, beards can also be faded and blended into a buzz cut excellently. This effect is very trendy and can look great on many men. But if you want to do this right, you’ll probably need the help of a barber. Some men can have a bit of a masculinity crisis when they start losing their hair. Growing a beard is an excellent way to feel more masculine and confident.

One of the most common hairstyles is a buzz cut with a skin fade. This is because it cuts the sides of the hair short enough to make the buzzed top stand out. On the sides and back, a skin fade haircut takes the hair down to the skin. Men can get a low, medium, or high bald fade from the barber. This cut is a cool hairstyle that is both trendy and cute. If you want something more stylish and different, the buzz cut skin fade might be the thing for you.

The skin fade is clean, low-maintenance, versatile, and style, just like its other versions. It is also effortless to get. The fade between the top and the sides/back of the hair makes a great contrast that makes this style work well.

Hair loss doesn’t have to be something to be ashamed of. Change how you think about it and see it as something to embrace. It’s not bald yet, but it might not be too far away.

When it comes, you should also welcome it. Balding is an entirely normal part of being a man. The manliest thing you could do would be to accept it. Getting a buzz cut is a great way to do that. The information in this article should have shown you how to do that. Have fun! Hope you’ll find this information about Buzz Cuts For Thinning Hair helpful.