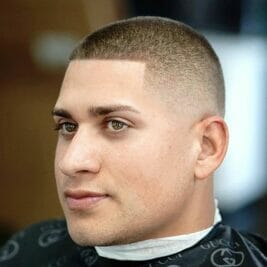 The attractive thing about the buzz cut number 1 haircut is that it is Liberating to go this short with hair length so that you don’t need to worry about styling and tidiness, and yet you have the most stylish haircut of all. In this article, we are going to discover a lot of important aspects of buzz cut number and the things that are important to know about it. So grab your popcorn, and keep reading!

What Is The Perfect Length For Buzz Cut number 1?

The clear answer to your question is 3mm, but the ratio of length is not so simple as it seems, so let me explain. Most prominent clipper manufacturers’ number 1 clipper guard can be used to trim it. It could be the tiniest clipper guard on the market. A lever on the side of higher-end clippers can typically be adjusted forward as well as backward. Forward suggests the open guard while backwards shows guard being closed.

With a clippers guard connected (such as a number 1 guard), “closing” the lever allows you to trim somewhat shorter than you could with the clippers guard alone. If you would like to go significantly narrower than a number 1 cut but may not want to go together all way back down to a zero guard buzz cut, this is a fine alternative. So, if you have clipper including a lever, you have this choice, albeit many people don’t use it as it is just an additional step.

The Look Of Buzz Cut number 1

In simpler terms, buzz cut number 1 resembles the look of light layer of stubble over your head. This haircut does not require much efforts and if you are keen of having neat haircuts then this is the best option for you. This is the simplest buzz cut to achieve because all you should do is put on a number 1 clipping guard and trim everything to the same lengths – top, side, and behind. Let me explain it with the simplest words possible.

There are a few of harder-to-achieve modifications just on number 1 buzz cut which are worth learning about. They appear to be a bit more fascinating than a standard induction cut. Both side hair are chopped shorter than that of the number 1 hair on top, which is the key difference. In a nutshell, a number 1 front about a number 10.5 or 0 guard on the bottom and sides.

Here we will discuss a list of different styles for buzz cut number 1.

The top of buzz cut number 1 fade is clipped to a length of number 1, but the back and sides slowly lengthen up to the top. The distinctive fade effect is produced by the complex blending of lengths. An illustration would be trimming the top to a number 1 position while gradually lengthening the sides and rear from a 0 lock at the bottom to the number 1 hair on top. When compared to a straightforward induction cut, where the top, middle, and back are all clipped to the same length, it gives a number 1 buzzed cut a more intriguing appearance.

Because the length supplied by the beard balances out the roundness caused by the super short hairs on the crown of the head, the buzz cut number 1 and beard are a wonderful fashion pairing. The exaggerated head shape that results from cutting a buzz cut so low is one drawback.

Physically speaking, you cannot add any height or length to the top of your head, such as with a quiff. Since the time allotted is simply far too short for you to complete that and you might not be accustomed to this, The head may appear more rounder than you would have anticipated as a result. Instead, you may make your face longer at the bottom as a fix. In other words, start shaving. Your beard could be longer and pointier the more length you desire. It’s a fantastic approach to adjust the face shape to hide your extremely short buzz cut.

We have a very detailed step by step guide that will help you get the perfect buzz cut number 1.  So let’s get into it.

Make Sure To Prepare The Clippers

Always get your clippers ready before beginning a buzz cut process. A subpar outcome is frequently caused by improperly prepared clippers. A set of clippers needs to be charged, brushed, and oiled before use. A pair of clippers that is fully charged will cut through hair much more quickly and effectively than one that is not. This will result in less pulling and straining as well as a more even cut. Naturally, this only applies if your clipper is rechargeable. If you have a pair of corded clippers, all you will need is access to a source of electricity.

Another explanation for tugging is clogged blades. Ensure that if any old hairs gets combed away from the area surrounding the blades. A little comb for this task may have been included with your clippers. An old toothbrush will do if you don’t have one. Finally, lubricating the blades will improve the effectiveness of the trim. If you don’t have access to the oil that should have arrived with your clippers, there are other options.

Wash And Dry Game Is On

Less stiffness and reluctance will be experienced throughout the buzz cut trimming after shampooing the hair and removing any extra oil and grime. Additionally, this results in a trim that is quicker, more effective, and more even than you could get without it. Before clipping it down, it needs to be completely dry.

Undoubtedly, the most difficult area to trim is the behind of the neck. Although there is no universal rule here, it is typically better to save it until last. Start cutting before a mirror after attaching the number 1 clippers guard (3mm) to a clipper’s end. Trim the top starting now. Trimming should be done against the grain.

Against the general trend of growth is what this phrase indicates. This typically entails clipping backward at the top. Move slowly and evenly trim every part of your body. Working against the flow typically involves pruning upward on the sides. Don’t forget to take care of the region behind of ears. When working on these places, use your other hand to slowly pull the ears down.

Look for any patches you may have missed. It will be simpler to complete all of this under well-lit conditions. Also, scan the area to see if you can detect any overlooked places which may not be as obvious. If some patches don’t seem to be pruning down, experiment with other trimming angles to see if it plays a vital role. Changing your trimming angle should work because there’s always strands that develop in various directions.

Naturally, the hardest part of the body to cut down is the back. It’s the most challenging location to see, so that’s why. Additionally, the backside of the scalp has some ridges and corrugations that make it difficult to run a trimmer over it. The back can be trimmed, but it will take more time. However, it will always be better if you had a reliable friend or family member who could do the backside for you. A second portable mirror would be quite helpful if you were doing it yourself.

Turn around so that your back is toward your primary mirror. After that, hold the hand mirror in the front of your eyes so you can see your rear of the head. Now, gradually shorten the back to a number 1 level. Try to get an equal cut by moving slowly over the bumps and corrugations. The crown region frequently develops in a variety of directions. This annoying, spiralling pattern is frequently referred to as “cowlick.”To try to trim it down as equally as possible, measure the various directions of development and alter the angles about which you cut it.

Especially with everything being so condensed, this is just not necessary. However, if you wished to create the neckline look even more sleek, you could opt to clip and curve it. Where the hair touches the nape of the collar is the neckline (nape). At a number 1 length, this line can indeed be left au naturel and still look great. However, some guys do prefer to have a neatly squared-off or rounded neckline. As you may anticipate, doing this by yourself might be challenging. But you can now do it with the aid of tools.

If you wished to round off the neck on your own, you could use this example of a neckline reshaping tool from Amazon. In the end, it comes down to preference. Leaving the collarbone natural at a number 1 range is actually not a huge problem. In either case, you might claim that your Amateur buzz cut was finished at this point. Step back and take in your work after washing off any extra hair and drying off.

Is Buzz Cut number 1 a Good Suggestion For Thinning Hair?

The buzz cut number 1 of course is beneficial for thinning hair since the short hair makes the thin areas less obvious. This is because the thickness differences between the thicker and thinner patches are not as great. Trimming down thinning hair to extreme shortness may seem contradictory. It could be alluring to let it grow out in an effort to cover up or even comb over the thin spots. However, there are several techniques to make thinning hair look less thin, such as by cutting a very tiny buzz cut like a number 1.

This is also because receding hairlines may appear less obvious as a result. Less obviously, the hairline (hair well above forehead) transitions from the forehead skin. They seamlessly merge into one another, reducing the overall appearance of the hairline being pulled back.

The length of the 2nd buzz cut is 6mm, compared to the length of the no.1 buzz cut, which is 3mm. The appearance is more obviously affected by this ostensibly modest length difference than you might immediately imagine. Both buzz cut measures may be described as “extremely short,” but for guys who don’t want to devote to the thin coating of stubble that’s also the buzz cut number 1 length, the buzz cut number 2 size is a preferable choice. A number 2 buzz cut will make the scalp slightly less noticeable, which is frequently attractive to people.

However, the advantages of both sizes are very comparable. They both work well for guys who have thinning hair since they hide bare spots and receding hairlines and improve their visual appeal. Additionally, washing and drying become a virtually insignificant component of daily grooming routine for both of the number 1 as well as the number 2 buzz cuts, making them both incredibly simple to maintain. For males who desire just a little bit more covering over their scalp, the 2nd buzz cut would’ve been preferable to a number 1. Even so, a lengthier buzz cut length would be required for styling; else, it won’t even come close.

In this article we have discussed all that you need to know about buzz cut number 1. Buzz cuts have always been a great and famous haircut choice for men, who look for subtle haircuts. Although buzz cut requires less styling time, it does need maintenance and a perfect stylist to cut it for you. But if you’re not comfortable with going to the barber like most of our readers then you can take all the help from our guide and we assure you that you won’t regret following our footsteps. Our guides for haircuts serve as a virtual barber, and what else can be better than that right? For more such haircuts you can read about buzz cut by John Cena and military induction haircut as well. Enjoy the best guides of the year.