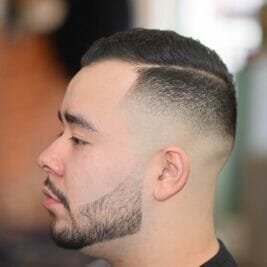 Generally, a buzz cut can work for fatter or rounder faces, but a slight fade is usually better. A buzz cut on fat face can also look better with beards. In more detail, let’s look at fat guys and how they can deal with buzz cuts.

The Buzz Cut on Fat Face You Must Try

First, the simple buzz cut uses only one setting on the clippers for the whole head. There is no texture, no fade, and no shaping. It is just very short. That sounds easy, but even the most straightforward buzz cuts can look very different, and it relies on the clipper guard.

Most of the time, clipper guards are called by a number. The cut gets shorter as the number goes down. If you get a number 1, you’ll look like you’re about to go to boot camp, and if you get a number 5, you’ll have enough hair to look like a burr instead of a classic buzz cut.

If you are a purist, you might say there is no such thing as a hybrid buzz cut. Just a fade on the sides, nothing fancy. Even though the hair is still concise, it has a slight texture. Again, some people might not call this a buzz cut, but it’s close enough that the average guy probably doesn’t care too much.

That’s the big question. Will a buzz cut make your face look fatter? Well, it’s possible, but it’s not a sure thing either. Buzz cuts don’t change the shape or feel of the head. So, buzz cuts will usually make a round face look even rounder, especially if the face is already round. This won’t be true for every big or fat guy, though, and the shape of your face will have a lot to do with how well you can get a buzz cut. In other words, you shouldn’t just think about how fat you are.

A buzz cut will make your head look even rounder if you are a big man with a round face. But if you are fat and have a longer face, it may not have as much of an effect on you. Even though you can’t change how your head is shaped, there are a few things you can do to make your face look less round.

Some guys want to cut the buzz themselves, but it’s better to go to your local barber and get a professional fade. Adding a fade makes a fat face look less round, and the head has a more pleasing shape. You don’t have to go crazy with it; a slight fade can go a long way. With a fade, you can still cut your hair as short as you would with a buzz cut, but you don’t have to worry about making a round face look even rounder.

Using the number 1 clipper guard on a buzz cut will leave you with short hair. Even though that much is clear, it might not be so clear how good that can be for hiding thin spots. After all, thin hair means different things to different people. So, if you have short hair all over your head, the bald spot on the top of your head won’t stand out as much.

But this doesn’t work as well as it used to, and if you’re covering up bald spots with a comb-over, a buzz cut can have the opposite effect and make these spots stand out.

Here’s where big guys need to be careful. Faces that are rounder and fatter tend to look younger. As a bigger guy, you’ll have a rounder face for a long time after you’re young. If you’re in your 20s or early 30s, this might be a big deal, but if you’re a little older and your face is already showing signs of wear, it might not be as big of a deal. So be careful in this area, and if you’re already a young man, make sure that a buzz cut doesn’t make you look too young.

Buzz cuts are an excellent choice for fat guys, but there are still some things to consider.The most important thing is to keep a round face from getting even rounder. A simple fade or beard can help a rounder, fatter face look better, and most guys will like the difference these simple changes can make.