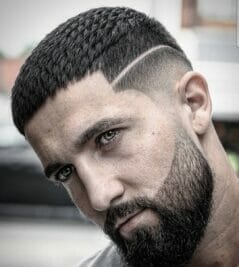 Even though other people may be jealous of a man’s curly hair, the man himself knows how unpredictable and hard to control it can be. Often, cutting it short is a simple way to fix it. Very brief. I will tell you everything you need to know about curly hair buzz cuts.

They can look like a Crew Cut, an Ivy League, or something else. Fades, Flat Tops, etc. There are a lot of choices. In the end, buzzing curly hair doesn’t just make it easier to deal with. It also has a lot of styles. When men are getting ready, time is a good thing. When it comes to grooming, many men do value speed and efficiency. Discover all there is to know about buzz cut curly hair topic with the following guide.

As usual, you’ll see some pictures and examples and learn some of the languages. I’ll also talk about curly hair cuts alongside fades and give you some tips if you want to grow them. Let’s dive in.

The two parts of this style are buzz cuts and curly hair. Both the haircuts have different varieties.

Casual observers may not be able to tell the difference between different types of curly hair, but men with curly hair may know that there are several types.It can be straight, tight, coiled, kinked, etc. When trimming a buzz cut, it’s not very important to know what the different types look like. In the end, the curls in your hair shouldn’t have much to do with the kind of buzz cut you get.

It’s more important to know the main types of buzz cuts and be able to tell them apart. A style that is, at its core, very simple can be done in many different ways. It’s a catch-all term for several different styles. Here are the ones you should know the most:

When most people hear the word “buzz cut,” this is the first thing they think of. It has been cut to the same short length all around.

A style that looks very military when very short.

Generally, in this cut, curly hair is present at the top is slightly lengthier in comparison to the hair presents on sides. Not by much—not more than a few millimeters.

The top hair is much longer than the side hair. Most of the time, the hair on top grows into a pompadour at the front. The Ivy League, an extended Crew Cut, and the Butch are two other styles. You can see pictures of each of them further down. Just make sure you know the basics of the theory before you start.

Choosing a buzz cut relies on a few things

The most important thing is what each person wants. If you like how a Crew Cut looks and feels, you should try it. But it would help if you also thought about the need for maintenance. Because it’s so easy, you could confidently use and trim an Induction Cut on your own. On the other hand, a Crew Cut will likely need help from a professional to keep up.

The top of a crew cut is usually long enough to give you some styling options. Usually, an Induction Cut wouldn’t. If this is important to you, consider it when you decide what to do.

You will start to recognize the look and feel of curly hair that has been buzzed short. It has a unique look, and this style is trendy at the moment.

In an Induction Cut, the hair is cut to the same short length in all directions. There are some good things about this. The main reason is that it’s so easy to do yourself. If you did it yourself instead of going to the barber, you could save a lot of money and time. I often suggest this style to men whose hairlines are pretty far gone.

It doesn’t hide or cover up receding temples like a Crew Cut might be able to. But it’s stylish and classy to accept baldness with a hint of defiance. Like the high and tight Crew Cut, the Induction Cut has a military look that many men like. It works well and is easy to use, and also looks great. If anything sounds good, you might want to try it on your curls.

2. A cut that starts low and ends high

This haircut is slightly higher than a gentle taper, just above the sideburns. As you can see, it’s a pretty easy way These days, it’s not unusual to see a middle-aged man with a low fade.to give a simple buzz cut a little more style. It’s great because it provides a primarily traditional manner with a modern twist while still being subtle. The low fade is getting more and more valuable as time goes on. They are getting so popular that you will likely see one in almost any job, situation, or place. They’ve been able to reach people of all ages.

These days, it’s not unusual to see a middle-aged man with a low fade. This style was worn mainly by young, hip, and urban men in the past

Buzz cuts and beards do look great together. Part of this is that growing a beard is an easy way to look more manly, but there are other reasons as well. Buzz cuts are significant in many ways, but they often take away a considerable benefit that longer hair gives you. If you let your curly hair grow longer, you could do whatever you wanted with it.

You could then use it to adjust and change the shape of your head and face. For example, you could make it look less round, square, etc. Except for longer Crew Cuts, this isn’t possible with buzz cuts because your head shape is visible, and you can’t change it. But a beard can help you do this. Since the beginning of time, people have used beards to change the shape of their faces.It is the main reason they might look great with a curly buzz cut on a man

4. The Crew Cut with Curls

Men with curly hair look great with crew cuts. It’s just right. A Crew Cut means that the hair on top is much lengthier in comparison to the hair presents on sides, which is buzzed short. The type of Crew Cut is also defined by how the hair on top looks. Ivy League Crew Cuts are very long, and Butch Cuts have the same length back and front. A Flat Top has the same long top and short sides, but the hair on top is cut into a flat, “deck”-like shape.

A man with curly hair looks stylish with a traditional Crew Cut like the one above. It draws a lot of attention and looks very classy. As you might expect, though, it needs more maintenance than a normal Induction Cut. You’ll certainly ask for helping from a barber to trim it, and you’ll probably need some pretty high-maintenance grooming products. You probably already know that curls can be hard to take care of. If you want to make your life easier, you might want to get a short Induction Cut instead of a Crew Cut.

5. A crew cut that fades to the skin

Everything that can be said about this style has already been said. I only mention it because it’s important to know that a Crew Cut can change more than just the hair on top. You can also make the sides and back exciting and unique. A fade can look great if it blends smoothly into the curly hair on top. I’ll talk a little bit more about fades in the future. But I had to show you the picture above because it was so good.

A “skin fade” length starts at zero and gets longer as you go up. It’s called a “skin fade” because the first step is to shave the hair down to the skin. Getting it right is difficult, so you’ll need a good barber to help you with this. But if you want a curled buzz cut that stands out more, adding a skin fade may be an excellent idea.

A pixie cut with a lot of volume on top makes the person who wears it look cool and retro. Just wear your most fabulous clothes to pull off the look, so you don’t look old.

8.Curls that are short and full, with a deep side part

A great look is short curls with many volumes and a deep side part. The hairstyle will work great whether you go to the office or on a date.

The Buzz Cut with a Fade for Curly Hair

You’ve seen a couple of pictures of it already. Yes, a fade can look great with several different curly buzz cuts. A fade refers to the gradual increase in length from bottom to top, often added to the sides and back. A low fade ends just above the sideburns, a high fade at the temples, and a mid-fade in the middle. A taper is also said a buzz cut, smaller in comparison to the low fade.

Most of the time, the client doesn’t understand the terminology or finds it hard to explain what kind of fade they want for their curly buzz cut. Be clear about the level where you want the fade to end and the length where you want it to begin. Tell your barber from the start that you wish to have a skin fade. One easy way to solve this problem would be to show your barber a picture of your desired hairstyle. It could help you avoid a lot of trouble and keep a good relationship with your barber.

Even though buzz cuts tend to keep men with curly hair happy for a long time, you may want to return to longer hair at some point. It may seem simple enough, and in general, it is. But if you remember a few things, it will make the process go more smoothly. Visit your barber regularly. As I mentioned, buzz cuts tend to grow outwards and quickly resemble a ball of fuzz or a bonnet.

To make it look more natural, the sides and back should be trimmed. Proper night-time curl care. Take care of your curls as they get longer. Curls are often thin and easy to tangle. If you have to, tie it into a bun or ponytail to keep it from getting tangled. Satin pillowcases also help keep pillows from getting broken. Ignore the stories. You won’t lose your curls if you get a buzz cut and let them grow back out. Be patient, wait, and take care of those curls.

Curls can be annoying to some men because they are harder to take care of, but many others would love to have them. If you want to keep your curls looking good but want to cut down on the time and money you spend maintaining them; a buzz cut could be the answer. We hope this guide has been helpful. I usually end these articles with the advice below. If you’re unsure, there’s no reason not to try it. I promise those curls will grow back. But no matter what, I hope you like what you read. We’re glad you stayed until the end.