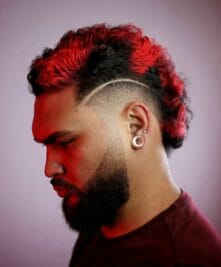 The Mohawk haircut is a nice change from crew cuts, fades, and buzz cuts. It has long hair below the middle of the head and short sides. It has been popular for hundreds of years, but it has only become associated with punk rock and alternative styles in the last few decades. We have pictures of trendy Buzz Cut Mohawks, tips on how to style your ‘Hawk, and a list of things to think about before you grab the clippers and start shaving. We have crazy designs with spikes and subtle ‘hawks for every guy and hair type. Check out the style guide for Mohawk haircuts to find your new look.

We’re sure there’s a mohawk haircut for every guy, whether he wants a traditional one with clean-shaven sides or a modern take on the classic.

With a buzz cut, long hair can be styled into a high Mohawk. The most amazing thing about the hairstyle is the stylish design on the side of the head.

Mohawks feature long sides. Use the clipper guard to leave some hair on the sides. You may make it more dramatic by dyeing your hair like the model.

The Mohawk hairstyle has changed in a lot of ways with the passing of time. With a shorter Mohawk, this haircut looks splendid.

We recommend the long ‘Hawk for guys who have been growing out their hair for a while and aren’t quite ready to cut it all off. This unique style works best with hair about 6 inches long or less. If you let it grow longer, it gets heavier and harder to style up. It looks like a half mohawk that stops above the neckline. You’ll need a lot of firm-hold gel with plenty of staying power to style it. For a different look, try pulling the length back.

5. The Mohawk of Troy

This style of Mohawk is based on the helmets the Trojans wore in battle. This style of Mohawk is like the horsehair design on the helmets of the Trojans in that it is longer in the front and shorter in the back. This should be designed straight up, not toward the middle like most Mohawks. Apply firm-hold gel to wet hair, brush it out, and then blow-dry it up. Adding hairspray will give you a classic look.

READ NOW  19 Great Haircuts For Teenage Guys With Round Faces

This Mohawk is a bold, edgy take on the normcore style that only a mohawk can offer. The Mohawk has a modern look because it is wide and ends above the neckline. The top is shaved with the #1 guard to leave a little stubble. It creates a lived-in look.

Fade Having a mohawk buzz cut alongside a widow’s peak makes a man look tough. With this buzz cut and beard, he looks great. The top and rear of the head have longer hair that can be styled into a Mohawk.

Mark Salling is a well-known actor from the United States. He wore many kinds of Mohawk hairstyles, all of which are worth admiration. One of the hairstyles people like on him is a short, spiky Mohawk buzz cut, which looks great with a clean shave.

With a widow’s peak and a buzz cut, this is the most popular short Mohawk haircut. It has a low, medium, or high top fade on the sides, making it stand out from other short haircuts.

It is a stylish buzz cut with a widow’s peak and a Mohawk. A guy looks excellent on those two sidelines. With both casual and fancy clothes, it’s a nice choice.

We’ve put together a list of the most popular and liked combinations of a short Mohawk buzz cut with a widow’s peak that you should try. Each style above is different and will make you stand out from the crowd. For a mohawk haircut, your stylist will have to cut your hair short on the sides and back while leaving the hair on top longer. For spiky hair, you’ll need a product with a firm hold. A low- to medium-hold product with a smooth finish is best for a natural, textured look.