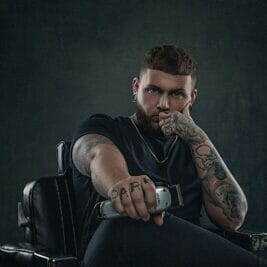 Would you like to know which long buzz cut to pick and to get one for yourself because you’re interested in them? If you nodded your head “yes” then you’re in the perfect space. The hair clipper is one item that is crucial nunber 5 6 7 and 8 buzz cuts. Each buzz cut requires the proper hair clipper number to give you the desired appearance. Many guys enjoy buzz cuts, but they are unsure of which style is best for them or how to give it to oneself. That’s exactly what we’ll talk about in this article, and we’ll try to give you a detailed explanation of long buzz cuts.

First Off All, What Is A Buzz Cut?

Numerous various styles might be referred to as buzz cuts. A clipper is used to trim a standard, vintage buzz cut uniformly all over. A buzz cut variation known as a “crew cut” leaves the top of the hair longer. The crown has the shortest hair, with the front having the longest hair and the rear having the shortest hair. Crew cuts are comparable to “butch cuts,” but the top hair is more evenly clipped (i.e. less tapered). Another buzz cut style that merely resembles a longer crew cut is called a “Ivy League.” These variations all have the traits of being brief and relying to varying degrees on the usage of a hair clipper.

Buzz cuts with numbers like 0 or 1 are extremely short and resemble shaved heads. You have very few style options with these lengths. The advantage of the lengthier clipper guard lengths we’re discussing today is that they provide you enough length to style buzz cut variations like crew cuts or butch cuts. You might even have sufficient length on top following buzzing the haircut with clippers to create other straightforward styles like extremely short faux hawks or quiffs.

Buzz cuts are highly adaptable, but you would be mistaken if you believed that first buzz cut will work for everyone. Buzz cuts are numerous; they range from 0 to 8. Are there really that many buzz cuts now? Each face shape is unique, just as no two people are alike. Single buzz cut does not fit all face types, just as not everyone looks well in every hairdo. The fundamental cause of the wide variety of buzz cut varieties is this. When it comes to buzz cuts, some men like longer buzz cuts.

Buzz cut number 5, 6, 7, and 8 are available for those who prefer lengthy buzz cuts. The hair will continue to be reasonably short till buzz cut 4. Your hairstyle will be lengthier and your scalp would be less obvious after you reach the fifth and higher buzz cut, though. Here is all the information you need if you’ve heard about buzz cuts 5, 6, 7, and 8, but aren’t sure which hairstyle will look best on you.

A buzz cut on number five will have 5/8-inch-long hairs. You will still have enough hair well with buzz cut in position five so it may be combed and styled. And you won’t have a bald head, either. This is ideal for all the men who enjoy short hair but would like to manage it how they please. This number Five buzz cut looks great with a style that has more hair on top and less on the sides. You can choose buzz cut 0 or one for the edges, but buzz cut number five should be left on the top. Most males can certainly pull off that appearance.

Shorter buzz cuts make be challenging to quiff, comb, and shape. You could just have enough hair with such number 5 to create a very brief quiff. However, styling it could be challenging, so you would be better off waiting till it has a longer buzz cut shape. Additionally, it’s the ideal length for a “high and tight.” Longer hair on top and short hair on the back and sides make up the high and tight hairdo. Blow the sides/back down towards a zero or a one, and the top down to a five.

The top should abruptly change into the sides or rear with little to no fading or tapering in between. What’s left is a really beautiful high and tight. In general, men who want to dress professionally should consider the number 5. One that’s simple to maintain, like smaller buzz cuts, but doesn’t make them look overly hairless.

A buzz cut in the number six style leaves 34 of an inch (19micrometres) of hair. It gives you a number of easy styling options and gives you a fuller appearance over smaller buzz cut lengths. You should have enough length with a buzz cut of a number six to create a tiny faux hawk in front and a very short quiff. At this stage, a casual observer would probably not describe your hairdo as a “buzz cut.” It resembles a common men’s haircut more so than a classic, well groomed buzz cut. This could be the solution you’re looking for. A #6 on top also looks fantastic with tapered or fading sides and back; this is a trendy and extremely contemporary choice right now.

This isn’t quite longer but need to be styled into an undercut, comb over, or side-swept quiff. However, this does give you alternatives, so it would be worthwhile to experiment with a little wax to see what you can accomplish. Therefore, buzz haircut number 6 is a great choice if you enjoy styling your hair. Having buzz cut number Six haircut, you can go for a really short quiff or a faux hawk on atop. However, buzz cut 6 won’t be your standard buzz cut; rather, it will resemble an usual cut but be shorter.

Your hair must be 7/8 of an inch long to qualify for buzz cut number 7. To achieve this style, you will only need to use trimmer number 7. On buzz cut no 7, the crew cut looks fantastic. You won’t run out of stylistic possibilities because your hair is considerably longer. To maintain your appearance, you will need to apply hair products because your hair will be longer. You’ll enjoy the change from short to long if you give yourself some neat fades on the sides. Please be aware that since your hairstyle is much longer than in the other buzz cuts, maintenance will be higher in buzz cut number 7.

A buzz cut # 8 is the last one. The lengthiest buzz cut here is the one. When it pertains to your hair, you must keep it at one inch in length. Buzz cut # 8 is the ready hairstyle if you want versatility and the ability to style it anyway you like. However, males with round faces shouldn’t get the buzz cut number 8. Hollywood star Zac Efron had their haircut in buzz cut no 8 fashion. You’ll look better if you keep the edges a little shorter.

Different clipper numbers are needed for buzz cut numbers 5, 6, 7, and 8. For each of these buzz cuts, we will instruct you which trimmer to use. Additionally, we’ll provide you with advice on how to style those buzz cuts.

You must remove clipper number 5 in order to do buzz cut number 5. Keep in mind that your hair cannot be longer than 5/8 of an inch. Therefore, that is the length you should aim for. Look in the mirror while trimming your hair to check your appearance. Move the clippers to the sideburns once you’ve finished trimming your hair to a height of 5/8 of an inch. To achieve a more classic appearance, taper the sides.

Your scalp will be completely hidden by the buzz cut number 6. You would need trimmer number 6 to achieve this style because it is extremely long and adaptable. Trim the hair on top to the size of 3/4 inch. Shorten your sideburns. It will look a lot better if you do this. A buzz cut and a full beard look great together. Therefore, attempt haircut number 6 when you can maintain a beard.

When styled in a crew cut, buzz cut number seven looks terrific. You must select guard number 7 because your hair will be 7/8 in length. The buzz cut # 7 style can be achieved without the use of scissors. It will be done by guard number 7. To give oneself a classic buzz cut appearance, use smaller clippers on the sideburns.

Buzz cut style number eight is the final lengthy buzz cut you can choose from. You must use guard # Eight because it is the longest. Your top hair will be thick and one inch long. Don’t cut your hair short on the sides if you like a more understated appearance. Cut the sideburns short, though, if you desire a more contrasted appearance. You’ll look distinguished as a result of this.

READ NOW  You Should Know About Buzz Cuts for Thinning Hair

Long buzz cuts offer advantages similar to those of shorter buzz cuts. Many Hollywood stars are currently experimenting with various buzz cuts, so besides looking fantastic, there must be some benefits, right?

Long buzz cuts allow you to style it anyway you desire, unlike shorter buzz cuts. You might choose to wear your hair up in a short quiff or a faux hawk for the buzz cut number six. Additionally, you can style buzz cut number seven in a crew cut. The length of the sides can be as short or as long as you choose. In terms of styling, there is no end.

Even though these buzz cuts are long, it won’t be tough to keep the style. You can brush throughout your hair with long buzz cuts. You can utilise hair products that are sold on the market. The only care needed is to trim your hair when it first starts to grow to the proper length. There isn’t much else you must do than that. They won’t be long enough here to blow with the breeze nor too short to give the impression that you have no hair.

All face types benefit from long buzz cuts. Four various buzz cuts are available, including the digits 5, 6, 7, and 8. Each of them will undoubtedly fit a particular facial type. Consequently, you have a few options to consider. You will therefore fit either of these buzz varieties regardless if you have a straight, round, oblong, rectangle, diamond, or another shape of face. Buzz cuts remain so well-liked because of this.

You now know how to achieve the 5, 6, 7, and 8-inch long buzz cuts. To achieve the ideal buzz cut look, just use the proper hair clipper. Try out long buzz cuts—they’re just as popular as shorter ones! These days, a growing number of males sport long buzz cuts. not just men who are bald. It’s not just males that get tired of doing their hair. Buzz cuts are common even on models. I won’t lie; I prefer having long hair. I do, however, have cousins and friends that adore having short hair.

In actuality, buzz cuts are just here to stay, and long buzz cuts in particular are secure choices. When it’s too late, you can always cut more but never less. Therefore, be cautious when selecting the ideal protection for the buzz cut. That concludes today’s article, thank you! Hope you enjoyed it a lot. Please feel free to leave any suggestions or queries in the space provided below, and we’ll be pleased to respond.