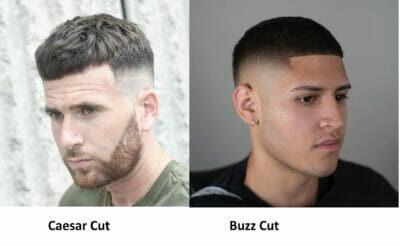 What is Buzz Cut?

The buzz cut is a very short hairstyle, where the hair is trimmed down to just a few millimeters in length all over the head.

This style started in the military, where it was used in a way to keep hair out of soldiers’ eyes and faces during combat. Today, the buzz cut is famous in men of all ages for its low-maintenance appeal and clean-cut look. Let’s know more about the buzz cut vs caesar cut.

What is Caesar Cut?

The Ceasar cut is named after Julius Ceasar, who was said to used to wear his hair in this style. It requires cutting the hair short on the sides and back while leaving it longer on top. This style can be changed to each individual’s preference, with different lengths of top hair being possible. The Ceasar cut is a popular choice for those who want a stylish and easy-to-manage hairstyle.

What Is The Difference Between A Buzz Cut And A Caesar Cut?

Although both buzz cuts and Caesar cuts are short hairstyles, there are some key differences between the two. A buzz cut is a style in which hair is trimmed to the same length, mostly close to the head. This can be achieved with either clippers or scissors. On the other hand, A Caesar cut is characterized by shorter hair around the sides and back with longer hair on top.

A buzz cut is a very short haircut where the hair is cut close to the scalp all around. A Caesar cut is a shorter version of a regular haircut with the sides and back tapered up to the crown.

Ultimately, the choice between a buzz cut and Caesar cut comes down to personal preference and what look you’re going for.

There are many different types of buzz cuts and Caesar cuts, each with its own unique benefits. If you’re looking for a low-maintenance hairstyle that is easy to care for, a buzz cut or Caesar cut may be the perfect option for you. These haircuts are great for those who have thin hair or receding hairlines, since they can help to camouflage these issues.

Buzz cuts and Caesar cuts are not for everyone, but if you have very thick or curly hair, these styles may not give you a look you desire. And if you’re looking for a more modern style that can be styled in different ways, a buzz cut or Caesar cut may not be right for you. Finally, it’s important to choose a haircut that best suits your needs and preferences. Hopefully, you enjoyed learning about the distinction between a buzz cut and a Ceaser cut.

If you still have any questions read down to the FAQ section.

FAQ On Difference Between Buzz Cut And Ceaser Cut

What is the difference between a buzz cut and a Caesar cut?

A buzz cut is a short haircut where the hair is clipped close to the head with electric clippers.

How do you style a Caesar cut?

A Caesar cut is a short haircut, but it gets its name from the way that Julius Caesar used to wear his hair – parted in the middle and brushed down over his forehead. You can use gel or pomade to style a Caesar cut to slick your hair down into place.

What are some of the benefits of getting a buzz cut?

Some benefits of getting a buzz cut include that it’s low-maintenance, it keeps you cool in summer weather, and it can make you look more masculine or tough.