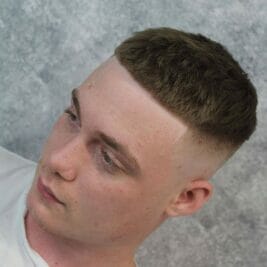 When cutting your hair this short, you should consider your face shape. A buzz haircut also called a buzz cut, is a style where almost all of the hair is cut off. You’re about to learn everything you need to know about Buzz Cut Oval Face, including whether or not they work, how to style them, and some great examples at the end.

Most buzz cuts are done with clippers or electric razors. The buzz cut gets its name from the sound these tools make as they cut hair. Buzz cuts are mostly seen on men, but sometimes women also get them. Let’s get to it.

Does an oval face look good with a buzz cut?

Buzz cuts look great on an oval face. Terse hairstyles look good on people with well-balanced features. Going too short, on the other hand, could make a face look too round. It would help if you never forgot how versatile an oval face could be. With a sloping jawline, the width of the face will narrow from the forehead down.

The features are the same size and shape but soft and not sharp. People with oval faces can wear different hairstyles and lengths without worrying about throwing off the balance of their features. Buzz cuts, on the other hand, should still be done with some care. In the next section, you’ll find some tips to help you choose the best style of a buzz cut.

How often do I have to get a Buzz cut Oval Face to keep it looking good?

This is primarily up to you and how you wear it. For example, if you get a more natural buzz cut without shaving the hairlines, you can probably get away with a lot longer hair because it will grow cleaner and more natural. It also depends on what you think is fresh. If you get a skin fade on the back and sides and want to keep it looking new, you should get it done every two to three weeks. If not, you probably won’t need to clean for another 4 to 6 weeks.

READ NOW  Take A Shower And Get The Best Haircut Of Your Life!

Don’t Cut It Too Short

If you have an oval face, you probably shouldn’t get your hair cut too shorter. Be careful not to cut off too much of the top of your buzz cut. Even if an oval face has a jawline that slopes down gradually, it can make the face look rounder. This is because the hair on top won’t give you much height. Consider these three tips before going for a haircut.

This is a problem with buzz cuts, but the problem is even worse with the buzz cuts that are getting shorter and shorter. You couldn’t style pomp or real quiff with any kind of buzz cut, however, the “lengthier” buzz cuts will leave you with a little bit of height on top. This is especially true for buzz cuts that are longer.

The difference wouldn’t be as big or noticeable as it would be on someone with a flawless round face, but people with round features can find it hard to manage buzz cuts. In the end, the features of an oval face are proportioned to keep the face from getting round.

Think about long top and the short sides

If you have an oval face, you can avoid looking round by getting a buzz cut and trimming the sides of your hair so that they are shorter than the hair on top of your head. Most people think of an “induction cut” when they hear the term “buzz cut.” This is a haircut in which all hair is cut to the same length in all directions.

But most buzz cuts these days have at least a tiny difference in length between the top and sides of the head. There might only be one or two different clipper grades going on here. Or, there might be a more evident difference between the two, like with different types of buzz cuts like crew cuts and Ivy Leagues.

Beards and buzz cuts look great together. This is especially true if you are worried that a buzz cut will make your face look too round. The beard will make the bottom of the face longer to make up for the fact that the top of the face is short. This creates a face look longer than it is, giving it a look of length.

If you have an oval face, on the other hand, you should also be careful in this situation. You do want to give the face more length, but you don’t want to go too far and make a face look like it has too much length. Remember that oval faces are naturally balanced and in the proper proportions. You want to ensure that any changes you make don’t make this benefit useless. So, you should keep your beards short or just stubble.

Here are some buzz-cut styles that work well with oval faces. You might not like all of them, but some of them likely will.

The hair is all cut to the same length with an extended induction buzz cut. On the other hand, this length will be a bit longer than a typical buzz cut. Even though the hair on the sides isn’t as short as the hair on top, the hair is long enough everywhere else that this doesn’t matter.

A crew cut is a buzz cut where the hair on top is left long and is often cut with scissors. From the front to the back, the hair gets shorter and shorter. On the other hand, the sides are cut down a lot shorter. The crew cut is great because it can be worn in many different ways. You have long enough hair on top that you could style it if you wanted to.

Most of the time, you could style a very short quiff high enough to add length and make a face look longer. Because of this, they work very great on oval shaped faces. Even though your hair is longer than it would be with a regular induction-style buzz cut, it’s still pretty easy to wash, dry, and style.

The crew cut is great because it can be worn in many different ways. You have long enough hair on top that you could style it if you wanted to. Most of the time, you could style a very short quiff high enough to add length and make a face look longer. Because of this, they work very well on oval faces. Even though your hair is longer than it would be a normal induction buzz cut, it’s still pretty easy to wash, dry, and style.

Buzz cuts and oval faces work best with stubble and short beards. Long enough to make it look longer, but not too long. This is a good illustration. It would be the same as heavy stubble, usually between 4 and 5 mm. It’s easy to keep up. You’ll look “bearded” even if you don’t take care of a long beard.

The number 4 buzz cut is one of the most common styles for people who want to switch to buzz cuts. They are short enough to be easily recognized as buzz cuts but not so short that they look too different. It’s also long enough to keep a round face from getting round if you have an oval face. This is a good option if you don’t want to go too short.

How to ask your barber to give you a buzz cut

If you’ve never had a buzz cut before and don’t know what length you want, show your barber pictures of styles that are similar to what you want. It verifies that both of you are on a similar wave. Don’t hesitate to tell the barber to begin with the long hair. Everyone’s hair is a different color and thickness, so a two on one person could be a 0 on another.

If you have an oval face, you should now know everything you need to know about styling a haircut. Don’t undervalue the benefits of this face shape, which can be used in many different ways. But at the end of the day, some styles and lengths will always look better on it than others.