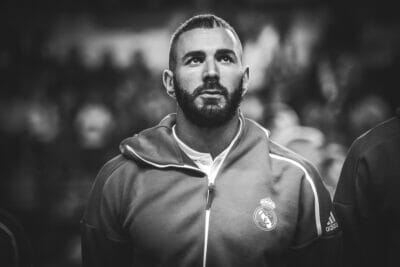 Born over three decades ago, Karim Mostafa Benzema has grown to become a renowned footballer across the globe. He is the current Real Madrid striker and captain.

Besides, Karim Benzema plays for the French national team.

His excellence on the field has earned him several accolades, including the prestigious Ballon d’Or.

Yet, that’s not all about him. His way of dress is impeccable, and his height gives many ladies sleepless nights.

Plus, his hairstyles have elevated him to the world map. Men, young and old, love his sleek haircuts. This article will discuss some of his latest and most stunning hairstyles to boost your look and confidence.

The fade is higher on his head around the height of the temple. The hair on the sides of his head is close, leaving a little more length on top. The high and tight buzz cut has allowed him to play around with the long enough hair on top.

A close look at his face shows that this hairstyle has elongated his face.

Think of wearing this hairstyle, especially if your face is oval or round since height creates an illusion of length.

As an experienced military folk in the world of football, Karim Benzema rocks in low skin fade. He has shaved the sides and back down to triple zero. However, there is a little more hair on top.

The shortest section in the case of a low skin Fade starts just above the ears. It drops down to the nape of the neck before rising gradually to the longest section.

This haircut suits guys whose faces are either square, round, or circular.

If keen, you may be able to differentiate between the Mid Fade buzz cut and the Low Skin Fade. To note the difference, you need to check where the blend is in the position of the head.

In the case of a Mid Fade, the mix begins nearly two fingers’ width higher compared to the Low Skin Fade. The fade is maintained smooth and gradual.

Saying that Karim looks sleek in this elegant style is an understatement.

The French Crop is a classy hairstyle featuring a spiky fringe, long hair at the top, and shorter sides and back. This versatile cut has numerous variations to suit your taste and preference.

Although famously worn by the US military in the Middle East, Karim has brought it to the football battlefield. This hairstyle assumes the triple zero section up to the temple.

The jarhead prides itself in an abrupt contrast between the hair and skin, usually referred to as a “quick Fade.” On many occasions, the top hair is shaved to a guard two or three.

This hairstyle best suits guys with circular, round, and square faces.

Karim Benzema hairstyles have several benefits. The most notable is that it’s low-maintenance; all you need is a trim every once in a while. Plus, you don’t need to use expensive products styling the hairstyles since the hair is too short to be arranged in any particular way.

Who Is Karim Benzema?

Benzema is known for his exceptional skills on the field, which have won him numerous awards throughout his career. Benzema is a true professional, and he is dedicated to his sport. He is a skilled goal scorer who is powerful and quick inside the box. Benzema has been praised for his performances at both the club and international levels.

How Can I Get A Karim Benzema Haircut?

Benzema’s hairstyle is called a buzz cut with a fade. This look is achieved by shaving the sides and back of the head very short. The hair on top gradually gets longer as it goes toward the front.

You’ll also want to visit your barber frequently or have some skills in order to maintain this style.