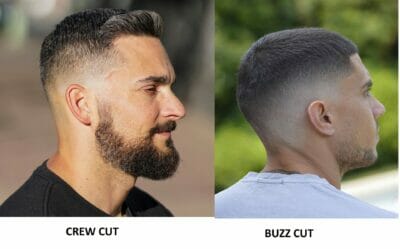 When hairstyles look alike, it might be challenging for barbers and their clients to understand each other. It shows something important. Let us check the difference—the Buzz Cut vs Crew Cut. The top of a crew cut is cut with scissors. On the other hand, Buzz cuts have the top, sides, and back all cut to about the same short length. We’ll talk about how to choose between a crew cut and a buzz cut after we’ve talked more about the differences.

Buzz Cut vs Crew Cut: The 4 Factors You Must Know

Here are four significant ways that these two styles are different.

Contrast Between Top And Sides

Buzz cuts don’t differ between the top and sides, but crew cuts do.

Crew cuts leave the top of the head lengthier in comparison to the sides, even though the top is still straight and “short.” The top is often cut with scissors. From the bottom to the top, the sides are cut short.

Buzz cuts are different from crew cuts because the top, sides, and back are all cut to the same (or a very similar) short length in all directions.

With regular buzz cuts, you can taper or fade the sides, but the distinction between the sides and the top is still tiny.

At the top of the Class

On the other hand, buzz cuts do not get shorter toward the top. From front to back, the length will be the same.

Most crew cuts have sides that are tapered or faded. It’s a part of the style that everyone knows. Buzz cuts, on the other hand, may or may not have sides that are cut in. Regarding crew cuts, the sides must be short and narrow. It’s one of the things that makes the style so well-balanced. Buzz cuts don’t have to have tapered sides like crew cuts do. With fades and tapers, Buzz cuts can look great, but the effect isn’t as straightforward or obvious as it would be with a crew cut.

Most crew cuts need a few scrapes with scissors to make the length of the hair at the top taper from front to back. Still, you would need a pair of clippers to narrow the sides. On the other hand, you only need a couple of clippers to do a buzz cut. Because of this, you could say that buzz cuts are “easier” to cut than crew cuts. Crew cuts, on the other hand, aren’t even close to as easy to do yourself. It wouldn’t be a good idea to try to do it yourself.

How to Choose Between a Crew Cut and a Buzz Cut

Consider the following things when choosing between a crew cut and a buzz cut.

Men with rounder or shorter faces should avoid buzz cuts because the short hair on top can make their faces look even more significant.

They would look better with a crew cut since they have enough hair on top to give them some height. They could also have crew cuts, so they have a choice. But people with rounder or shorter faces (like squares) may need to be a little more careful. Buzz cuts are known for making your face look bigger than it is. It is because there isn’t much hair on top. Because of this, you can’t add height or length by giving your hair a short quiff. If your face is round or short, a crew cut is better than a buzz cut because you still have some length on top to work with.

People who don’t want to worry about styling their hair should get buzz cuts. Crew cuts require a little more care than buzz cuts because they often need a little product to look good.

There are lots of differences between buzz cuts and crew cuts. So much so that if you mixed them up, you might ask your barber to give you a cut you never wanted. When you choose between the two, think about how they are different. There’s a good chance that one will be better for you somehow than the other.