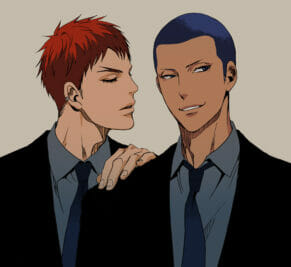 Anime characters always look cool because of their funky hairstyles. Most of them are having long spiky hair with a cold attitude. Other than the stories, their attitude and hairstyle make us fall in love with them. But what about buzz cut anime characters? Are they exactly as cool as we want? If you are an anime lover, you may disagree.

Because, in most of the cases, the character with the buzz haircut either plays the role of a comedian or supports the protagonist being a side character. However, this concept is wrong. We are going to introduce you few anime characters with a buzz cut who are just as much badass as you want them to be. The point of explaining all these things is, don’t underestimate the buzz cut. It is indeed a cool classic haircut.

These days, the number one trending anime is Attack on Titan. We know how every character is playing a crucial role in the whole anime series. Let’s talk about a side character. Do you remember Conny Springer? What he did do to save his mother and how did he choose to save the world by letting Falco go? Even up to the very end, he supported and assisted Armin to let the army go from the port. Such a good swordsman, a good son, and a good fighter is indeed the spirit of many. He probably didn’t get the popularity as Eren and Levi, but he is a hero too.

The first encounter between the warlords and mugiwara crew happened with Sir Crocodile. Sir Crocodile changed a lot from the first time. Not only he saved Luffy multiple times but also showed progression in leading a better life. While talking about him, we shouldn’t forget about his right hand, Mr. 1.

Mr. 1 is a muscular man with a stunning buzz cut fade. I can bait, by looking at his posture and look, every bodybuilder man will love to copy his style. This amazing swordsman with the buzz cut, Mr. 1 will be remembered by the One Piece fan always.

This volleyball player from the Haikyuu is a legend too. If you want a perfect example of “Don’t underestimate someone by his look”, then Tanaka is the boy. From the very beginning, we all have thought this character is funny and going to entertain us throughout the matches. Well! We are not wrong completely. But this man also moved us with his strong determination, respect for the captain, and gameplay.

When talking about stunning haircuts, avoiding the anime Tokyo Revengers will be a serious offense. Though the anime has a deep meaningful storyline, you can’t ignore the popularity that comes from the badass nature of the characters and indeed because of their cool hairstyles. Hakkai Shiba is one of them. This tall man has fought well alongside the Tokyo Manji gang. The cool and calm nature of this character made girls mad about him. You can give it the same try if you are in high school too.

How Can You Have These Buzz Cut Like Anime Characters?

You can have these haircuts if you get a picture of them. Because probably your barber is not an anime fan. So, ask him to do the haircut by showing him the picture of all sides. You just need to take care of two things. Those are- face shape and grade ratio for the haircut. If your barber is an expert he’ll also ask for these. If your face shape must match the grade ratio, you can have the haircut of your desired anime character.

Anime characters are drawn and then animated. The creators expand their way of thinking for the story, the design of the anime characters, and as well as the hairstyle. So, sometimes it is not possible to copy their haircut 100%. But surely you can get almost the same style. You need to have a clear aspect and a good professional barber to make this happen. That’s all about the buzz cut anime characters’ details. We wish you’ll find the best match for yourself. For more information and more amazing haircut, visit our site.