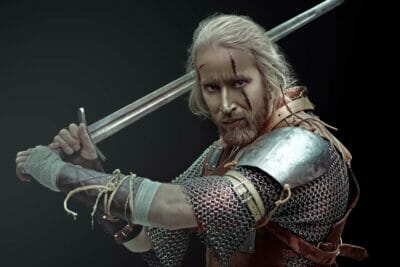 Mutton chop beards are sideburns (long) that are connected with a mustache. Game players who are Witcher fans think the addition of this hairstyle is a great choice. Many of the Witcher fans have trimmed their beards, according to Geralt in Witcher 3.

Witcher, being a legend, does not do anything ordinary, and he has slain Mutton Chop beard style like no other.

This beard style is like our very own and well-known Santa Claus. Players love this new feature in Witcher 3 because it gives them an offer to change Geralt’s beard style.

Remember the time when just a mustache was the only trend. We think Witcher is still a fan of that trend and will not let it go out of fashion.

Classic goatees of any kind make a statement that is somewhere in the centre. You want to grow facial hair but don’t want to go all-out with a full beard. The classic goatee is the beard everyone wants to try at least once, and the same was the thought of developers of the witcher 3.

This is a badass beard style and is now a part of the best action game, The Witcher 3. It is among some of the other beard styles found in the game.

Sideburns or side whiskers are one of the most classy beard styles. For centuries, this beard style has impressed decent men.

Although today’s sideburns are a little different from the old times as things need to adapt to the new culture. They can be Ice Picks, short tapered sideburns, or thick Mutton Chops.

Chin curtain’s average length is one inch, and it starts from behind your ears and goes around the chin. Chin curtain beard ends at the opposite ear. You can decide length according to your face shape or your preference. Witcher being a popular game character, has also set some high standard beard goals. The best thing about Witcher having all these beard styles proves that one person can try numerous beard styles.

Should you try any of these Witcher 3 Beard Styles?

When you see something, and you like it, enough to ask this question, “should I try this?”  Then you surely should!  Everyone is unique and different, and so we have different likes and dislikes. In the case of The Witcher, it is the same. People love that character, and games are based on that character.

The release of The Witcher 3 and its features of changing beard styles have made this game even more popular. Players love The Witcher and so want to try his new beard styles. If you’re a Witcher fan, I would recommend you to go to your barber and ask him to transform you into The Witcher. Sounds cool? Try it then!

All the beard styles are mentioned from the list of The Witcher 3 beard styles. They are all very cool and unique. Although the Witcher has spiced it up with his powerful personality and attractive hairstyle, you should not overthink and go for the one you like the most, according to your knowledge. They’ll go with all face types. You just need to spice it up with a good hairstyle.

In our blog, we help our readers to choose the best Witcher 3 beard styles. In today’s blog, we have covered the background of “The Witcher 3 Beard Styles” and have also advised you to try them out. If not all, then at least your favorite one. If you are gaming lover then you should definitely try any of the Witcher 3 beard styles. What we think is that attractive facial styles are a secret to an interesting life.