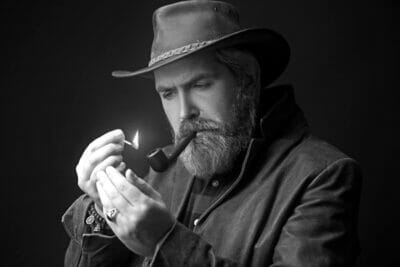 Before globalization, the West was one of the fastest and top parts of the world. We all know western culture because of its fashion senses and luxurious lifestyle. Especially in the 19th Century, the West was at the zenith of its flight of advancement. At this time, the rest of the globe began to learn from the West and take small steps toward modernity.

Nowadays, many old-school men want to look like old classic gentlemen. For that, your look and personality should be groomed in Old West Beard styles. Moreover, as we know, the beard plays the most significant role in the game of a specific personality style. Your beard adds charm, class, and elegance to your personality, like an emerald to a crown. Now, you would think, it is the 21st Century, where can I get 19th Century styles.

Well, here I am, with some of the most stylish, elegant, and old beard styles of the West from the 19th Century. Also Read: 14 Best Italian Men Hairstyles to Get Sexy Appearance

The English beard is one of the classic Old West beard styles.

It is typically a noblemen’s beard style; most English noblemen used to have this style. If you want to be a 19th-century nobleman? You can consider it a mustache style, and you can see it as a “no beard, beard style.” If you wonder how well this can be. You will have a classic look with just a long mustache and a clean, shaved face. The well-known physicist and writer of Sherlock Holmes, Sir Arthur, exclusively pulled up this style.

The French Fork is a dramatic and elegant one. This style has never been out of fashion, it’s just you should have a strong personality, and you are ready to go for one of the most stylish and classy Old West beard styles. The French Fork is also known as the American tong. In a full beard style, hair extends from the chin, ending with a two-division.

This is one of the dramatic and funky Old West beard styles, which requires low maintenance. One can have an elegant and funky look with this beard style. A mustache connects to strong sideburns, and the jawline is strong, yet the chin is shaven clean. There is a lot of confusion between friendly mutton chops and a mutton chop beard style. However, both are different with the absence of a mustache in mutton chops.

If you are wondering, how can a mustache be a handlebar? The mustache has an upper loop in this Old West beard style, just like a bicycle handle, hilarious right. Well, the look is quite hot with increasing a charm in your personality. It best suits a large face.

If you want to look sexier and hot, then go for this Old West beard style. Hulihee is a mutton chop paired with a lengthy and wavy beard. Now you must have started to imagine a look. Yes, the hottest look one can have from this classic, Old West beard styles.

An evergreen old squared beard style, from the Old West beard style. Just a lengthy beard extending from the chin and connected with the sideburns, this is the finished look of the Old Dutch beard style.

This Old West beard style is exclusively a combination of a goatee with a patch of beard and a pointed mustache.

One with a contrasting personality must go for this elegant and Old West beard style. It will definitely give an old-school touch, to be more specific, a 19th Century touch to your personality.

The last, undeniably most stylish, and trendiest one. It is rough and all about illuminating masculine vibes. The word ‘cowboy’ itself intrigues us with the image of tall, dark, handsome, and a hot personality. The cowboy style is all about a mustache and beard game, a unique one.

There are several types of cowboy beard styles:

Here are some steps to maintain this style.

Do Old West beard styles require high maintenance? Well, I do not think so. To level up your game of beard and your personality, this is the least one can do. After all, you want to stand out in the crowd; that is what you want, right. These Old West beard styles will surely help you groom your personality and probably make you stand like an epitome of fashion for other people.