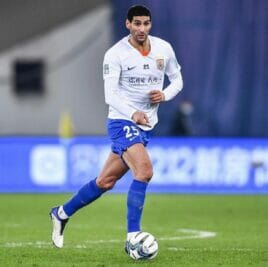 Marouane Fellaini Haircuts have been nothing short of breathtaking for some time now. Each new look always makes headlines no matter the time, day, or hour. Keep reading this article to see more about his iconic hairstyles.

Who Is Marouane Fellaini?

Marouane Fellaini is a Belgian football player who has played for both the Belgian National Team and Manchester United. Today, Maroune Fellaini now plays for Shandong Luneng Taishan in China as a midfielder.

He was born on November 22nd, 1987, and began his professional football career in 1997 with Anderlecht. Fellaini is mostly a Central Midfielder, although he can also play as a Defensive Midfielder and an Attacking Midfielder occasionally. At eight, he began his training at Anderlecht in Etterbeek, Brussels, Belgium, where he grew up. Here are some of his icon looks over the years.

33-year-old Belgian footballer, Marouane Fellaini, has played for Belgium’s national team and Everton in the English Premier League. Even though he is not black, this Maroune Fellaini Haircuthas garnered much attention.

How To Rock This Maroune Fellaini Haircut

Since he has naturally thick and curly hair, he achieved his afro look effortlessly. His afro hairstyle is considered natural because he doesn’t use any products to keep his fro in place. Anyway, to rock this Maroune Fellaini Haircut effortlessly, things must be done to retain the appearance.

A wide-toothed comb or pick is needed to create an afro. Comb your hair straight by combing upwards away from your scalp. To prevent harming hair shafts, section your hair and work them into tiny parts., From a distance, the hair on a finished head resembles a ball because it sticks out from the head dramatically.

Men with straight hair can only achieve this style. You can use products like conditioners for the curly look to accomplish that. If you cannot make your straight hair curl, it would stick out, and you would resemble a porcupine.

In addition, after the hair has been combed, a substantial quantity of gel or another hair product would be required to keep it in place. Marouane Fellaini Haircut is curly, so this hairdo fits him well. It doesn’t take a lot of time or specific materials to keep it in place, and it doesn’t need to be reapplied during the day. When you wake up, just use a pick comb to tease the hair away from the scalp and then shape it.

Before Manchester United’s Champions League match against Sevilla, the club’s Belgian midfielder was a social media sensation. Footballer Marouane Fellaini stands out from the crowd because of his bulk and voluminous afro hair.

Before Manchester United’s Champions League match against Sevilla, even a shadow of the giant Belgian would have enough information to identify him. The afro, which was Maroune Fellaini Haircut, would make him stand out consistently.

It didn’t take long for a photo of the midfielder, who got his hair styled like the iconic Mickey Mouse ears for a GQ Style magazine feature, to blow up on social media. While participating in a British interview, Fellaini experimented with various outfits, but the Disney-inspired appearance was the most popular. He packed his hair into two buns to make it look like Mickey Mouse’s ears and caused quite a stir.

Belgian enforcer Marouane Fellaini’s signature hairdo, which distinguished him from the crowd, mysteriously vanished. Although Belgium was eliminated early from the World Cup, Fellaini drastically modified his look.

On November 22, Fellaini’s birthday, he posted a snapshot of his new Marouane Fellaini Haircut and labeled it “new year, new look #birthdaytommorow.”

Marouane Fellaini shared a picture of his new haircut on Instagram. After letting go of his curly hair, the Manchester United player took on a new style. Marouane Fellaini Haircut made him look different, and the internet was set ablaze with comments from other users.

Marouane Fellaini posted a picture of his new haircut on Instagram to show off to his fans. People even jokingly said that the only disguise Marouane Fellaini needed was a new haircut, not a false mustache and sunglasses. The former Manchester United player shaved off his signature curly hair, which he has had since joining Everton in the Premier League ten years ago.

In his new look, the Marouane Fellaini haircut makes him look like a completely different person. Instead of taking a long way around, the midfield battering ram took a shortcut and announced his new look on social media.

Before taking off his afro look, Marouane Fellaini was one of the few players to spot a full afro look. If you wish to spot any of his iconic looks, you may go ahead. Suppose you want to, but you are skeptical since you do not have a full mop of hair, worry not because your hair situation can still be remedied. Any of Marouane Fellaini Haircuts will complement your look.