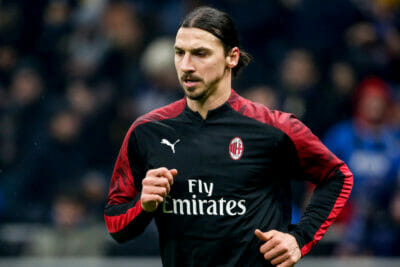 Ibrahimovic hairstyle is known as a top-knot Man Bun. This hairstyle is somewhat controversial and befits the egoistic big Sweden, who is well-known for his brash personality and outspokenness as well as an incredible level of self-confidence that often tilts towards arrogance.

The Ibrahimovic hairstyle used to be perceived to be the hairstyle for timid men putting in the extra effort to impress women. But thanks to Ibrahimovic and several other superstars around the world-Heath Ledger, Harry Styles, and Chris Hemsworth to mention a few- the man bun hairstyle is now considered in a more favorable light among hair fashionistas.

Nowadays, the Zlatan Ibrahimovic hairstyle and other hairstyles that are similar to it represent relaxed confidence as well a classy look that sets one apart from the hordes of fades and crewcuts hairstyles that are sometimes way too common. While most other celebrities combine their man buns with a sizable amount of facial hair, the Zlatan Ibrahimovic hairstyle is often worn by the former Manchester United and Milan center forward himself, uniquely with a clean-shaven face- or more recently, a circled beard and no sideburns.

If you do want to learn more about the Ibrahimovic hairstyle? Keep reading this article to discover how to style your hair just like Zlatan Ibrahimovic.

What are the requirements for the Zlatan Ibrahimovic hairstyle?

You should know your facial structure, so you can style your man bun accordingly:

This Ibrahimovic hairstyle can be worn by anyone who desires it but it is generally considered to be most suitable for men whose facial bone structures are less well defined because it makes the face appear longer and slimmer. Just as it is with Sweden’s record goalscorer, Zlatan Ibrahimovic.

The average thickness of hair: This hairstyle does not favor persons with hair that is either too thick or too thin. If your hair is too thick the man bun will be rounder, making the head appear bigger. While thin hair will expose bald or balding spots on the head when the hair is pulled backward.

Long hair: Hair length of at least ten to fifteen inches (10-15”) is the basic requirement for anyone who desires a man bun. This brings about the serious job of growing one’s hair longer than usual. However, to keep growing hair in the best condition, it is advisable to regularly trim it to avoid suffering from hair splits which can weaken the hair up tip the shaft and force you to cut the hair, and start re-growing over again.

It requires attention: Anyone who wishes to style their hair like Ibra must be willing to put in the effort required to take care of lengthy hair. The Ibrahimovic hairstyle is no different from other hairstyles with long hair. It requires regular washing (two to three times a week) and also trimming of the sides, the back, and the nape at least once every nine weeks.

Quality hair products: Given that the Ibrahimovic hairstyle requires long healthy hair, it is essential to apply only top-quality hair products to boost hair growth and maintain it. Natural hair ingredients such as coconut oil or palm oil should be given priority when deciding on which shampoo, conditioner, etc., to apply to your hair to keep it moisturized and without irritation.

Tips on how to style your hair like Ibrahimovic

How to maintain a Zlatan Ibrahimovic hairstyle

Wash the hair regularly and thoroughly using products such as shampoos, dry shampoos, moisturizers, and conditioners amongst other products. Also, regularly visit your barber for the trimming and tapering off your hair on the sides and back of the head

This type of man bun is characterized by the position of the bun being lower, at the back of the head. The low bun creates an air of a carefree man of the world.

An example of this can be seen in American rap artist, A$AP Rocky. It is the perfect alternative for ponytails and it’s very popular among black men. And, it is mostly complemented with an undercut or faded on both sides, while packing the top into a high bun. It is also cool for those that want to change their afro hairstyles.

The slick man bun with an undercut fade

This is often a combination of a top-knot man bun with an undercut that has a fade. The undercut and the fade further highlight the prominence and style of the bun especially when viewed from the sides.

The dreaded bun with an undercut and fade

Like the afro man bun, this is more common among blacks and black Americans and it is simply a beautiful combination of dreadlocks, man bun, and a fade