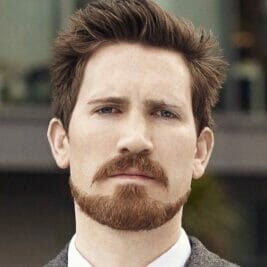 We have covered a lot of beard styles but there is always a demand for something new. The Balbo beard style is not new. In fact, it is as old as Italo Balbo himself, the man who made it popular during World War II. But it’s look is what makes it rank here. This beard style features a crescent beard look with a mustache that is disconnected from the jazz dab. The mustache appears to be suspended between the nose and the upper. The reason why it’s so popular is because of its randomness. A thin strip of hair along the jawline, disconnected mustache, and inverted “t” look are the pillars of this beard style.

What does the Balbo beard style say about your personality?

The style was first adopted by a fascist. You can fill in the rest. Wearing it back in the day was considered far-right authoritarian. But now it’s a symbol of being bold and confident enough to explore what was once and still is forbidden by society. You are going to be a picture of walking manliness with this beard style.

Can anyone rock the Balbo?

Most people know Balbo from its family member Anchor beard. Who doesn’t know Tony Stark and his famous Iron Man beard? Tony Stark and Johnny Depp single-handedly brought back the beard style of the past as a symbol of being brave. But it doesn’t matter who did what if you can’t benefit from what they did, right? Can I wear the Balbo beard (or Anchor beard for that matter)? Is it going to suit my facial geometry? Will I look as good as Tony in this beard style? Read further to find out.

Face types That can rock different variations of Balbo beard:

The fact of the matter is that no beard can suit equally good on everyone. So, it’s safe to say that classic Balbo beard is not for everyone. But don’t be discouraged as little tweaks in the style like cutting the hair shorter from the mustache or making it a bit thick in the jawline area can do the trick in making this beard style suit, everyone. Here’s a list of face types on which this beard style can suit and with what variations:

The good news for square-shaped people as this Balbo beard style is going to angularize their face further or if they angle the hair carefully, they can also opt to make their face somewhat round.

Round face is going to benefit the most from this beard style. As the jawline hair remains intact in this case of the beard style, the overly round face can be made to appear somewhat square.

Further, the addition of inverted t in the jazz dab area can add further pleasing angles.

Heart-shaped faces look somewhat feminine due to the weaker lower jaw shape. The addition of the anchor bear style on the lower jaw imparts geometry to the weaker jaw. Take Tony, for instance, don’t get me wrong his jaw is good as is. But the point is that his lower jaw looks more angular and strong because of the specific beard style

Most importantly, how to grow a Balbo beard?

Now that you know that most people can grow Balbo, it’s time for the part for which you were waiting for the most: How to grow a Balbo style beard? It’s no rocket science and with a little patience and some back and forth trimming, you can get the look you desire. Follow these steps to get started:

The first step In all the hair business is letting the hair grow. Observe whats the natural flow of hair. Let it grow for about 4 to 6 weeks.

Light use of a Trimmer:

So, a month has passed and now it’s the time of harvest. Use a trimmer before touching the razor. Trim all the hair above and below the jawline, leaving a fine line of hair that is thin at the area below the temples and keeps getting thick towards the lips.

Using the razor is a must for this beard style. Shave off all the hair that you shortened using the trimmer. Carefully shave the jazz dab area in an inverted t shape.

Take Special care of the mustache:

Mustache is a pretty notable feature in this beard style as it’s disconnected from the rest of the beard. Both sides should be equally and uniformly shaped to avoid the look that somebody inexperienced has shaped it.

Using the trial and hit method, make both the temples symmetrical. While disconnecting the Balbo from the temples, make sure that both sides start from the same length. Round-faced people can try and add angles by leaving the chin area denser and longer than the rest of the beard. Heart-shaped faces can benefit from the exact opposite of leaving the same length.

Good old Balbo style is not going to cut it for the hundreds of different face types and we have to innovate. Here are the best and the most trending-hot Balbo styles that you should consider while choosing one:

Although the modern-day Balbo is marked by having denser and thicker hair in the cheeks, It wasn’t that way when Mussolini used to wear it. He rocked more of a French look but in terms of Inverted shape. Moustache was disconnected from the start though.

Balbo with a Mustache variation:

Balbo beard is rebellious enough but if you want to go the extra mile, you can always add different mustache variations. A handlebar, pencil mustache, and classic Mexican mustache will look especially good with the Balbo. Horseshoe mustache is a straight no. Checkout the trendiest Mexican mustache and beard styles here.

If you are looking for a starting point and are not yet confident enough to immediately embrace the full and final bold version of the Balbo, you can start with a somewhat acceptable version. What’s that different is, you leave the neck area untouched. Two inches below the chin to be specific. You can shave the rest. The mustache remains the same as in the original style.

Balbo with a long beard and a ponytail:

So, you have mastered the art of dealing with compliments on the original Balbo and your feeling bold. The next step and this is a valiant one, grow a full-length beard on the Balbo style. You can check out some of the best long hear styles

Pencil Balbo with a Pencil Mustache:

This look will suit only those with some experience with the Balbo. Pencil thin Balbo along jawline has the ability to add some angles to a round face. Pencil mustache is there only to compliment the Balbo.

Overall, it may be said:

The Balbo beard style is an audacious style to add to your look. Learn how to deal with crushing eye contact that people are going to make when they see you rocking a one. With the variations we mentioned and different styles of the Balbo, you have options. Countless options. The thing that you’ll have to be careful with is that you’ll have to trim differently with each variation. Adding angles to a round face has become easy with Balbo. You’ll have t learn how though.